What is Progreso di Korsou?

Progreso di Korsou is a group of people who want to contribute to the development of the country of Curaçao in many different areas, with a focus on the long-term. Among other things we do this by participating in the social debate via the (regular and social) media, and by giving our opinion and recommendations about a range of subjects and policy areas. For this purpose we have a permanent core of people, occasionally assisted by guest writers. For the time being Progreso just wants to offer a platform for people to exchange ideas and enter into dialogue about socio-economic issues.

Progreso aims for a Curaçao of self-confident, well-educated citizens who are proud of the country they live in. Progreso considers it its mission to make a contribution to the well-being of all inhabitants of Curaçao. And there is a lot that needs improving. Too many people live in poverty. Too many people are unemployed; there are hardly any opportunities for scholarship students wanting to return to the country. Too many people are dissatisfied. Integrity does not come naturally to everyone. A patronage system holds many in its grip. Abuse, including child abuse, is an everyday occurrence. The natural environment in Curaçao is being neglected. Healthcare and social safety nets are becoming prohibitively expensive. The rule of law is under pressure. The government is considered inefficient, with a lack of transparency and inconsistency in its policies. The information provided through most of the media is not sufficiently critical and independent. Important companies like Aqualectra and Dokmaatschappij are in considerable trouble and the decision regarding the Isla problems finally needs to be made.

To change all that we not only need significant improvements in the educational system and the economy, we also need a joint vision, something we are all aiming for. All our future projects and initiatives can then be derived from that vision. For example, if we want to successfully market Curaçao to the rest of the world as an amazing holiday destination we have to be able to fulfill that promise. Travelers have to be able to get in and out of the country without problems. Environmental pollution must be reduced to a minimum. Tourists must sense the hospitality always and everywhere. Criminality must be prevented to the maximum extent. However, if we choose to focus less on tourism and more on things like the knowledge economy, ‘green development’ or the logistical hub function etc., the activities of both the public and the private sector will have to live up to that vision. And so on.

Citizens who are proud of the country of Curaçao will do everything they can to make the country as good and beautiful as possible. And all those people who directly or indirectly get their income from the tourism sector, or may do so in future, have to be aware that if they want to sell Curaçao as a ‘product’ to the rest of the world they have to do everything they can to ensure a beautiful and good product. If citizens become more involved in the future and destiny of the country they are more likely to be prepared to contribute to its further development.

In short, this example shows that if we seriously want to work on a prosperous Curaçao, on well-being for all residents and a clean environment, everyone needs to get involved. No-one should feel left out, so that in the struggle between involvement and individualism the involvement of all takes the upper hand.

Another point: The ‘brain drain’ that Curaçao has been faced with these past decades is a real nightmare. Economists who look at the problems associated with economic progress unanimously agree that growth is not possible without a sufficiently large group of both administratively and economically competent people. It is therefore in Curaçao's best interest to attract people with a higher education (including the scholarship students) and to make Curaçao as attractive as possible for this group in particular. Curaçao needs to open itself up to the world more. We cannot continue living the way we are.

Solidarity: All people are first and foremost fellow men and must be treated as such. Everyone must behave humanely. It should not make any difference what someone looks like, what the color of his skin is, whether he is religious or not, what his mother tongue is, where he was born, what his sexual orientation is, what music he likes or what his political views are. This is the biggest challenge we are all facing.

The population of Curaçao consists of people with vastly differing cultural, ethnic and religious backgrounds. This diversity can give Curaçao the strength needed to develop the country. But it is essential that everyone has respect for each other, is prepared to protect the other person if necessary, and is prepared to contribute to the welfare of others where possible. The country of Curaçao must be characterized by unity in diversity. Not individually, but together!

Integrity should go without saying: for citizens, for the government, for the politicians, for the business community, for the financial institutions, for public organizations, in short: for everyone.

Social justice is essential if we are aiming for a society in which a sense of community and joint responsibility are important characteristics. Social justice means, for example, that the benefits of economic growth are fairly distributed among all the inhabitants, and that everyone is given the opportunity to participate in the employment process. Unemployment, and certainly if the numbers of unemployed become significant, is a threat to every society, especially when there is high youth unemployment.

To be able to realize most of these values it is essential to have more transparency. Transparency in all areas of the public administration: digital access to government records, permits issued, decisions made etc. But also with regard to recording the voting behavior of members of Parliament, transparent decision-making processes, and transparency in political party financing.

The approach of Progreso di Korsou

The future is in our hands. Each individual citizen can contribute to realizing the objectives of Progreso. And that is exactly the intention: that everyone becomes involved and feels involved in building the country of Curaçao. And we still have a long way to go …

Slavery is an inextricable part of Curaçao’s past, and that past has had a strong influence on what our society looks like today, economically and politically as well as culturally. That past cannot be wiped out and it deserves to be talked about, including in our education. However, the influences of that past need not continue working their effect into the future. We are a free people and as such we can make choices. We can choose to look at other people as fellow men first and foremost: as equals who deserve the same respect that we demand for ourselves.

To start with, everyone should adopt the basic approach of treating others the way they would like to be treated themselves. That is a choice everyone can make - and can make right now. No one has to wait. Choose to become a positive example for others!

There are many opportunities for citizens to make choices; for example the instant decision to throw rubbish out of the car window or not. But other choices as well: who to elect as the administrators of the country of Curaçao, of a sporting or neighborhood association, a union, an employers’ federation or a parent-teacher association - there are so many opportunities. Make sure to elect people who set an example for others when it comes to integrity, quality, transparency and a sense of responsibility. Social leaders of that caliber are essential and can have an incredibly positive impact on those around them.

Awareness is an important condition for positive change in our society. In the coming period Progreso will address a number of different themes, about which everyone can formulate and express their own opinion. A public debate via the social media. The people who participate in this debate and who agree with the values and ideas of Progreso can approach others in their own neighborhood or in their own work environment to disseminate these values and ideas and, most of all, put them into practice. After all, a good idea without concrete action remains just that: an idea.

It's now up to the individual citizens! It’s up to you! And where possible Progreso wants to support the socially committed citizens. In that respect the 35th president of the United States, John F. Kennedy, articulated it perfectly: ask not what your country can do for you - ask what you can do for your country.

The first day we went live with our Facebook page, we already had 140 likes. In the meantime we already have more than 2,000 likes. It would be good if there were many more. The more likes, the more people show that they want to cooperate with building the Country of Curaçao. Like and share our Facebook page. Strong together! 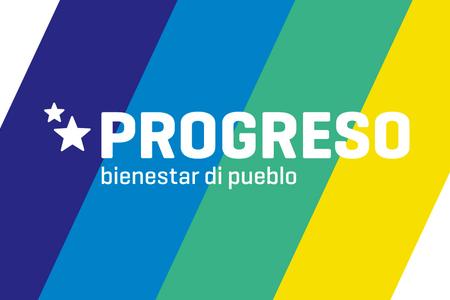